Everyday, Pongo has been sitting at the front window waiting for hours for Papa’s truck to pull into the driveway; disappointed when it doesn’t.  He has really been missing Steve this week so Reid, Pongo, and I drove out to Big Lake last night to spend some time with Papa.  Our moping, miserable Cattle Dog turned into a bouncing, yelping, fiend who could barely contain himself when he saw Papa walk out of the rental house!

Steve and I decided to take the dogs out for a short hike after dinner.  We chose somewhere where we knew we could let the dogs run free, where no one else was going to be around.  We drove to a quiet, deserted area Steve had recently surveyed and walked into the woods. Both Pongo and Reid love being in the woods: running free, jumping over logs (that would be Pongo, not Reid), and exploring all the smells that come with hiking in a new place.  It was refreshing to be in the woods, after a long work week, spending time with Steve and watching the dogs enjoy themselves. 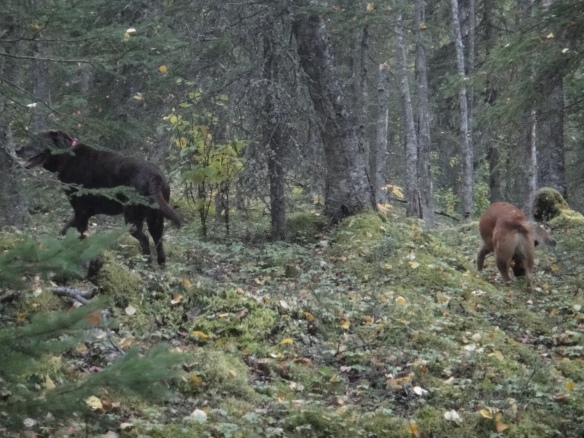 As we were hiking along, Pongo began frantically running around in wide, sweeping circles with his nose to the ground.  I commented, “He’s on the trail of something,” with images of cute little squirrels foraging in the area going through my mind.  We called Pongo to us.  He came but caught the scent again, and was off.  Then, what was suppose to be a peaceful evening hike turned one of my biggest fears into reality: Pongo + Porcupine = DISASTER!

I look over to where Pongo is sprinting around and see a porcupine, ever so slowly attempting to climb a Spruce tree as Pongo is closing in on his prey.  Steve is running toward the tree with the climbing porcupine, in hopes to intercept Pongo.  Steve is on one side of the tree, Pongo is on the other, the porcupine is in the middle c-l-i-m-b-i-n-g at turtle speed.  Pongo jumps up to grab the porcupine.  He misses.  He gives one last adrenaline-fed superman jump as the porcupine continues to work its way up the tree.  As this whole scene plays out before my eyes, I hear myself screaming, “Pongo, leave it!”  And when that doesn’t work, “PONGO, NOOOOOOO!!!!!” knowing well enough that when Pongo is in prey-drive, there is no stopping him: listening ears are off and wild dingo mode is on.

Steve is finally able to grab Pongo, leash him up, and carry him to a safe area away from the porcupine.  We check him over not knowing if he was able to make contact with the porcupine.  No quills protruding from his face–check. No quills on his underside–check.  Then we see it…a paw scattered with porcupine quills. 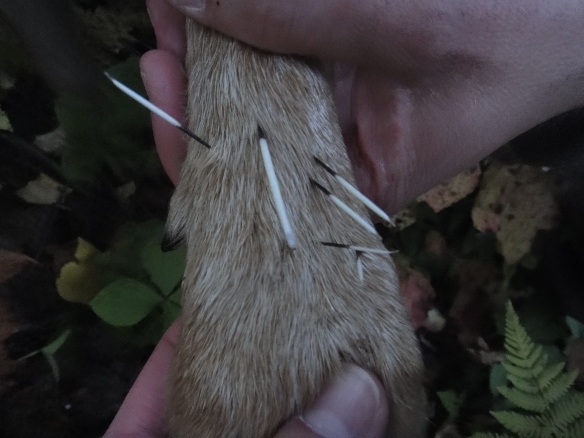 Steve immediately pulls out his Leatherman and gets to work. 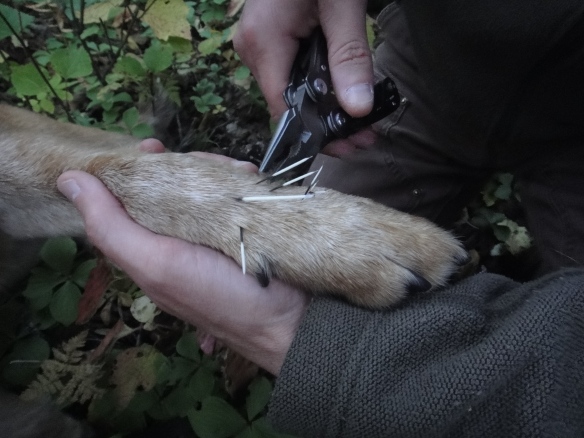 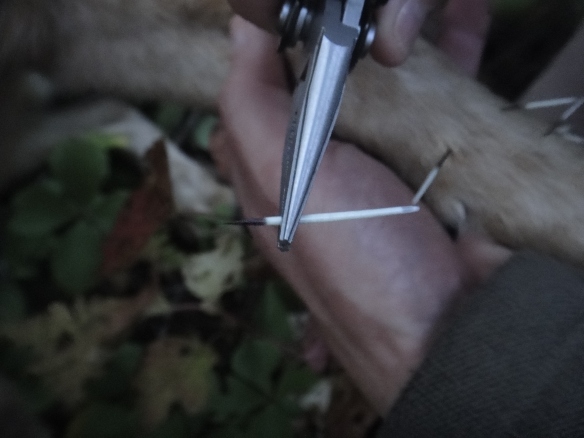 I’m more than sure it hurt like hell having those quills pulled out but Pongo was a trooper–keeping one eye on Steve’s Leatherman and one eye on the porcupine sitting in the tree 50 feet away.  He sat quietly as Steve pulled out each quill, for the most part giving an occasional flapping of the paw or yelp.  And all I could think of to myself, as Steve pulled each quill out is…It could have been worse.