To our horror, Pongo has found a new use for the basket muzzle he wears during recess at doggie daycare: a poop grater.  Yes, he is now smashing the front of his muzzle down into his doggie friend’s poop, or maybe even his own, and coming up with a poop smeared muzzle.  Maybe he’s found a new way to entertain himself but personally, I think it’s an act of rebellion: he’s going to make sure others pay for him having to wear this embarrassing contraption. 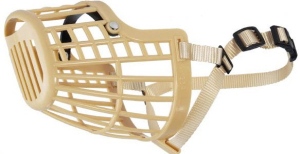 Poor Miss Janelle, his teacher today, ended up with poop streaked pants from Pongo’s antics.  And while I screeched “GROSS!” when the staff told me of his repulsive adventure today, they just laughed and replied…”We’ve seen worse.”

Here’s Pongo after a day of keeping his daycare teachers on their toes.  If he’s this worn out, I can’t even imagine how they’re feeling!